Oh, Hi, It’s me.
It’s been a while, and yes I’ve been a little MIA this month, but I think it’s what I needed to be honest!

So almost two weeks ago now (yes, slow to write), ‘P’ & I started our 10 day long vacation in San Francisco. To be honest, we did more in the two full days we had in San Francisco then I thought we would, & literally hit all the touristy destinations & more!

So we arrived late on Wednesday night, we ended up staying at the Four Seasons, which was his little surprise for us. It was absolutely beautiful & I made it clear that it was a one time thing, but yes we took advantage of every little thing we could there. I even got my on sale, very cheap Steve Madden flats shined because they offer it for free (judge me, I don’t care).

So after arriving & finally sleeping, we woke up way too early the next day & got room service (‘P’ has a way with getting things for free, I don’t ask but I won’t complain). After that we headed to the Golden Gate Bridge, took some photos & walked across, took more photos. We were determined to walk both ways but ended up cabbing back across & going directly to Pier 39. From there we walked around, saw the seals living their best life, and had lunch at Bubba Gump Shrimp.

After we had a real delicious meal, we headed over to catch our ferry over to Alcatraz. We crossed shark infested waters (yes, thats all ‘P’ talked about on the ferry over….), finally getting to the former prison. There we basically walked around, & ended up doing the walking tour with the little headsets. All I can say is wow, I knew it was intense but wow. 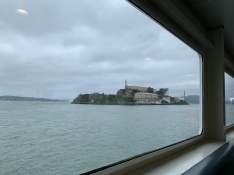 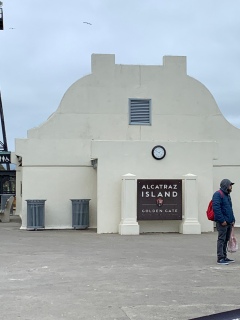 From Alcatraz, we headed back downtown & walked around everywhere & then back to the Four Seasons & then we ended up going to the gym for a quick workout since we knew we would fall asleep if we didn’t keep moving. Plus, we got free access to the Equinox & if it’s free you know there is no way in hell I was not trying it cause Equinox is hella expensive & only downtown here, plus it wasn’t worth the hype, it was too busy for my liking. After the gym, we got ready & went to dinner at this steakhouse called ‘Epic’ it was pretty fancy looking (yes, white table cloths), but had the most beautiful view of one of the bridges at night. That alone was worth it.

The next day, we woke up nice & early yet again, this time we walked right over to the car-rental place where we had rented a Tesla … Judge us all you want but when in San Francisco, we had to, plus its the only car you really don’t have to fill up on gas on once your done with it, so win – win. We drove out to Muir Woods National Park to see the redwood trees & get a nice stroll in. You need to venture out there next time you are in San Francisco that is all, it was so beautiful & just breathtaking, the drive out there was even more spectacular as well. 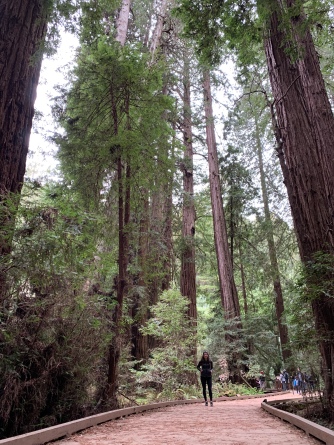 From Muir Woods, we went to this pizza place called ‘Tony’s Pizza’ basically it’s so famous there was a line out the door an hour before they even opened, yes ‘P’ made us stand there & wait. I complained, but my goodness that was the best pizza I have ever tasted in my life & so worth the wait. From there we drove all around basically. We went to the Painted Ladies, drove by the Full House House, drove down Lombard Street. Then we headed back downtown, did some walking around before we headed back to the hotel to clean up for dinner. 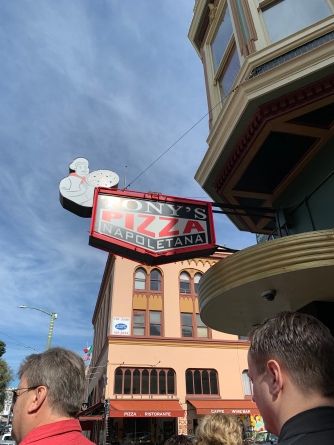 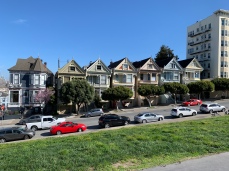 We grabbed a drink at the hotel before we left to celebrate Valentines day, then headed over to ‘Scomas’ & let me tell you, my lord, was this the best valentines & maybe best dinner ever. It’s like famous for it’s seafood & you’re right on a pier, so clearly it’s all pretty fresh. We had an amazing dinner that also to our surprise costed nothing compared to the night before, another win-win. 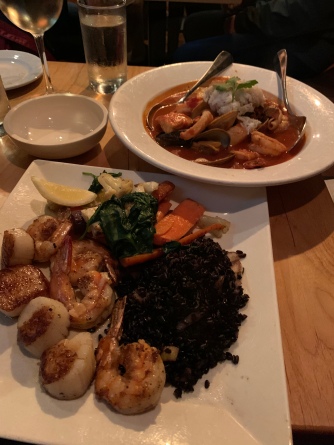 Overall, I can tell you I definitely fell in love with San Francisco. I mean it’s such a chill city, never too cold, the food is amazing, the views & even the city alone is just beautiful. I feel like there is so much to do still, so hopefully one day I can go back & discover a little more of San Francisco. It was a jam packed two days but honestly I don’t think there is any other reason to do it any other way!