So I just watched this one season, six episodes show on Netflix called ‘Quicksand’. My dad randomly picked it to start watching on the weekend (I think he thought it was a movie) & instantly fell asleep like 3 minutes in. I on the other hand, was literally hooked.

It did take me a few minutes to realize that it was a Swedish tv show, that was talked over in english. It was interesting to say the least. I’ve never watched a show like this, & it kinda threw me off that I could see lips moving differently then the words but I got used to it pretty quick.

Maja, a student in Stockholm, finds herself on trial for murder after a tragedy at her school. More doubts and suspicions arise when new revelations are made.
– Thanks IMDB

It was pretty intense to say the least. It’s basically her in jail, waiting for her trial/the investigation, with all these flashbacks about leading up to what happened. They keep you guessing obviously until the last few minutes about what really happened. Each episode brings you closer to the truth but leaves you wanting more, which is how I got hooked.
As the events of the day in question are revisited, her complicated relationship with her boyfriend, Sebastian, & his wealthy family also becomes clearer. The worst part about the whole thing was seeing just how crazy & unstable her boyfriend becomes over time in the flashbacks. 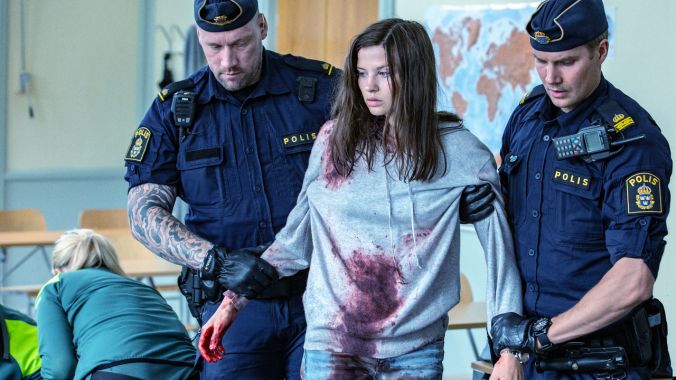 Overall, I surprisingly enjoyed it & would recommend it for everyone who enjoys thrillers mixed with some teen drama, but I’m just hoping this doesn’t mess up my Netflix recommendations now.

Oh & because tonight is a huge night here in Toronto:
Go Raptors!

6 thoughts on “I Just Watched: ‘Quicksand’”