This past weekend I was super, super lucky (maybe super x1000) to be able to take a quick trip to Arlington & Dallas.

But before I begin this post, I know people are going to think me & my pops are crazy for doing this but this past weekend, we literally spent just over 24 hours in Dallas/Arlington & if you ask me, it was totally worth it. Having both been to Dallas/Arlington a few times already, we were totally okay with spending such a short amount of time visiting. Yes, don’t worry we clearly had a reason for going. We also, planned this trip super last minute (I mean we booked everything Thursday to leave on Saturday), which I don’t like doing at all since I’m pretty Type-A about having a plan, but everything came together pretty nicely.

So Saturday morning, we woke up pretty darn early to head to the airport. We landed at the Fort Worth Airport around noon, we picked up the car we had rented (do this is you ever go to Dallas, so worth it!) & drove over to Northpark Shopping Centre. We needed to stretch our legs & unfortunately we couldn’t check into our hotel until 3 pm, plus there really isn’t much to do in Arlington. We ended up going to this plaza by the mall that has a Dick’s Sporting Goods, Bloomingdale, Saks Off Fifth & just walked around. I don’t know if it’s just me or is shopping in the US different? Might just be me. In the plaza there was also a Dallas Cowboys ‘fan’ store, so we picked up some more cowboys stuff, I mean went all the way down there so we may as well pick up some stuff. We finally started to get hungry & found this little place called Zoe’s, we had some salads & kept it pretty healthy for lunch. From there we drove into Dallas & took a walk around the JFK Memorial, which was pretty cool. I’ve been to Dallas a few times & never actually checked it out. We also went over to Wild Bills Boot Shop, I ended up finding a short pair of cowboy boots, which I absolutely love & my dad bought himself a leather belt. I’d say it was a successful trip to Wild Bills. From there we decided to finally make our way over to the hotel. We stayed at the Four Points Sheraton in Arlington. Which is a stone throw away from AT & T Stadium. 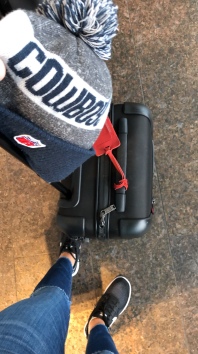 After relaxing a little, we got ready & made our way towards AT & T Stadium. All I can say is, wow. I have been there for a regular season game, but the playoff atmosphere was nothing like I had ever seen before. Just walking to the game was a sight to take in. I also was still lightly in shock that we were in Dallas, about to watch the Dallas Cowboys play the Seattle Seahawks in the first round of the playoffs. As you can imagine, I was on cloud 9. So I really don’t have much to say about being at the Cowboys game last weekend, I think I am still in stock that 1. they won & 2. I got to watch them win. But ya, basically it was super nuts in the stadium. We ended up running into the couple that were sitting behind us on the plane, what a crazy coincidence right, to bad they were Seattle fans or we would have maybe hung out with them. Enough of that. So inside was clearly insane. Everyone was screaming & waving their towels & cheering. I was even jumping up & down a few times, it was pretty crazy being on the inside. That all being said, me & my dad didn’t take our usual ‘inside the stadium picture’ but we were a little preoccupied cheering our boys on. Overall, the Cowboys beat the Seahawks 24-22, & as you can imagine, everyone was going absolutely nuts. Maybe one of these day’s I’ll finally get around to telling you all how & why i’m a Cowboys fan.
After such a long & eventful night we skipping going to the bar & just went straight to bed. This little old lady can only take so much excitement in one day.

The next day, we woke up with that post ‘Cowboys won the first round’ feeling. Which was pretty darn awesome. We basically woke up, packed & drove back into Dallas. Had a quick little Starbucks breakfast & then headed to the Aquarium. I didn’t have the heart to tell my dad that I have already been since he was so excited, so I ended up giving him the grand tour. My favourite part was walking through the tunnel under the sharks, oh & seeing the Ocelot. My goodness, pictures of Ocelots do not do justice, they are so adorable in person. Overall we spent a few hours walking around, & it was worth it to see these beautiful animals & learn about them in the process. After the aquarium, we walked towards the JFK Memorial again, this time we went for a City Tour of Dallas. We rode around on the red trolley car & learned about Dallas! From there we tried to go to Ellen’s for a very late lunch but could not get in, I was so not surprised considering how amazing the food is. We ended up sitting on the rooftop of Gators, which is a pretty dingy pub, & ate some not so healthy food, which was alright with me. I needed at least one unhealthy meal while I was in the south. From there we basically just drove back to the airport & waited for our flight to take off, & yes, you guessed correctly, it was delayed.

To wrap this whole post up, here’s a picture of me in Texas.

Would you plan a trip super last minute & go for one night?

Now if you’ll excuse me, I need to get back to planning some more weekend trips!