It’s a little chilly up here in Toronto, so excuse me while I reminisce on my trip to the Bahamas I took in September ….. I woke up to snow this morning & honestly I would give anything to be somewhere warm right now!

So almost two months ago now (it’s a long over due post, I know), I was super lucky & got to visit the Bahamas for a quick long weekend relaxing in the sun! With everything I have had going on these past few months, I was on cloud 9 to just toss my phone aside & relax, not having to worry about a damn thing! That being said, I got to tag along & spend 3 nights in the Bahamas with my parents & another couple. We ended up staying in a very beautiful condo overlooking the Albany Harbour. & I have to say that oh my lord, the view from the balcony alone was amazing. We stayed in a gated golf cart community & I can definitely say that traveling is going to be tough from now on. The amenities were absolutely amazing, the gym was designed for top athletes & I had an absolute field day, we also learned how to play this game called paddle one day (its like a team version of tennis but with small rackets), I’m still not sure how I felt about it!

We decided to take it easy the first night, we decided to see Crazy, Rich, Asians since it was playing that night. I know what you’re thinking “they went to the Bahamas & watched a movie, WTF”. That was my exact reaction to the whole thing as well… But I can’t lie the book was way better as always but they did an amazing job really following the book, it was so close to being the same which is so rare!

Anyways, the second day, I got to go golfing with my dad & his friend at the Albany Golf Course. My god. I only had enough energy to play the front nine holes, considering it was so warm out but I think I had my best round yet. I felt extremely lucky & I was so excited that I got to golf at a course my brothers would kill to golf at. After finishing the front nine, I took off & ran to the pool to cool off, leaving the ‘men’ to finish their round. As you can imagine, I spent the rest of the day pretty much lounging by the pool until it was time for dinner! For dinner, we took a little trip to Baha Mar & my goodness it is one beautiful resort. We had an amazing dinner at the Italian restaurant there before we hit the casino. Usually I opt for some slots but I ended up hanging out in the cigar bar with the boys since I was a little tired from being in the heat all day & just wanted to sit (i’m low key the laziest person). 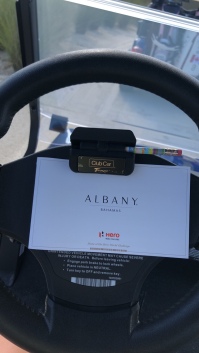 After a long night at Baha Mar, we spent our third day just relaxing & enjoying the day. As I mentioned briefly earlier, we had a paddle lesson which was interrupted by an unexpected rainstorm. We played a few rounds at the indoor court & spent the rest of the day by the pool. That evening instead of going out with the adults, I ordered myself takeout wings & pizza & watched tv on the balcony where I ended up falling asleep around 930 maybe, who really knows, but I clearly needed a very very quiet & early night. 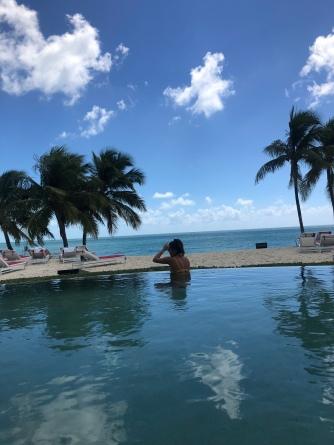 Day 4, I took a quick walk around the area, & finished packing before we headed to the hotel (not an exciting day, I know). Oh wait, it gets good again. After we landed back in Toronto, I went to the special baggage area where I was waiting for my golf clubs (we never check suitcases, just travel with a little carry on to save time), we noticed we were waiting an abnormally long time. After 15 -20 minutes or so, all these clubs/special baggage from OUR plane started arriving & after checking mine wasn’t there.. Strange right. After 30 minutes, we went to check the other special baggage spot, because well Pearson is so large there’s three spots. Well it wasn’t at any of the three. By this point I was sitting on the baggage spot, tired of waiting. Finally after around an hour, we talked to them at Customer Service & lone behold, my golf bag was still in the Bahamas, it never made it on the plane. The whole car ride home, we could not get over the fact we wasted over an hour in the airport waiting & wondering if my bag would make it. My dad was already going on about how he had all the receipts to give Air Canada so they could buy me all new stuff basically. To end this little off topic saga, my bag apparently did make it on the plane but was never placed on the carts to bring to the baggage claim spot, so it made it on the plane & was at Pearson the whole time we waited, it ended up being couriered to my house that night. Talk about an adventure eh. 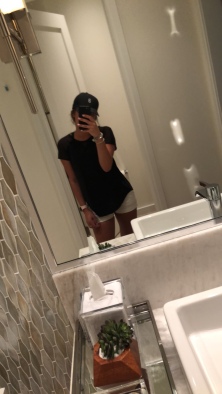 Overall, it was a little weird being away with both my parents & another adult couple & not having my brothers there, I am so used to having someone else to chill with & play games, etc. But I had a great little weekend getaway on my favourite island, which was exactly what I needed after an exhausting few months of work & commitments that had been keeping me very busy!

Right now I am currently trying to figure out where to travel to next, I would love to hear some suggestions, I love everything from beach relaxing trips to sightseeing/adventure trips. The big question is, where should I travel to next? I really want to fill this passport of mine up with stamps!

What was your favourite trip you have ever taken?

11 thoughts on “3 Nights in the Bahamas”